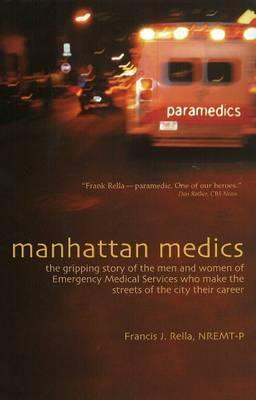 On the morning of September 11, 2001, while firefighters climbed the steps of the World Trade Center, New York City Paramedics were on the street below treating the wounded. When the Twin Towers finally collapsed it was the job of these street doctors to keep the injured alive. This first-hand account of the 11th of September also depicts the day-to-day lives of medics in America's largest city.

This is the only first-hand account of the September 11, 2001 attacks and aftermath written by a paramedic. Starting just before the attack on the World Trade Center, the book follows Rella's paramedic crew from their station at St. Vincent's Hospital in lower Manhattan and depicts the day-to-day lives of medics in America's largest city. The book contains real-life dialogue and speaks with a realism that comes only from personal experience.

"Frank Rella–paramedic. One of our heroes."
–Dan Rather, CBS News

From School Library Journal
Adult/High School–An emotional, vivid portrayal of the way Rella and his fellow Manhattan paramedics responded to the September 11 tragedy. When he got home from a crazy double shift and heard the news, he raced back to Manhattan. On his own initiative and often without regard for superiors' orders, the author worked at the center of activity at the World Trade Center. He took the first injured person, a firefighter, into the hospital. He literally saw his life pass before his eyes when he was pelted with debris as building number seven collapsed. Rella describes it all-the heroics of the men as they rushed to aid victims, the agonizingly long wait for instructions at the Chelsea Piers staging area, and the backstabbing and bureaucratic wrangling that went on between groups in the midst of this disaster. In terms with which teens will identify, the author describes his fellow paramedics, warts and all; the myriad responses people have in an emergency; and the aftershocks of the tragedy. A fast-paced read, the story occasionally gets bogged down in explanations of the various paramedic agencies and positions. Still, it's a readable, welcome tribute to these heroes.
–Jane S. Drabkin, Chinn Park Regional Library, Woodbridge, VA
Copyright © Reed Business Information, a division of Reed Elsevier Inc. All rights reserved.

From Booklist
Teacher, ex-marine, emergency medical technician, and paramedic Rella began work on this book as a way of debriefing himself after the critical stress of being on duty when the World Trade Center fell. What evolved is a very personal memoir of that day and those immediately after the attacks. Beyond that, it is a tribute to the valiant efforts of all emergency medical personnel, everyday, in every city in which they serve. Although he changes names to shield the privacy of specific individuals, Rella graphically portrays the psyches of those who opt to run into burning and collapsing buildings rather than flee the scene, as most people do. Further, he pays homage not just to the uniformed folks who gave their lives trying to save others on 9/11, but also to the walking wounded who will forever carry mental scars from having to watch helplessly as thousands died. This account of those who have made the dangerous work of rescue a personal routine is significant for its raw honesty.
–Donna Chavez
Copyright © American Library Association. All rights reserved

"A fast-paced, riveting account of the September 11, 2001 terrorist attack on the World Trade Center as Rella experienced it."
–New York Daily News

"Brings us a riveting vision of that "day of infamy" from the humble viewpoint of one of its heroes."
–Staten Island Advance

"This compelling story... is a testament to the hearts and souls of all medics throughout the United States and beyond."
–Heartland Reviews

"One of those special books that is worth giving to yourself as a present."
–EMS Magazine

"[Rella] gives an unforgettable picture of 9/11 which is suitable for all ages with its earnest characters and popular style."
–Small Press Book Review

“Must Read” titles represent the top ten percent of new books published in America each year. Manhattan Medics receives a Must Read!

"It's a pedal—to—the—metal, lights—and—siren ride through the streets of Lower Manhattan, as vivid as a heart attack. These are New York¹s fearless street docs. You¹ll ride shotgun as Frank and his friends prowl the city, fight the bureaucrats, even save a few lives. The next time you hear a siren behind you, I promise you¹ll pull over quick."


"Rella writes from personal experience. The reader enters the world of street doctors which is not often seen by the general public. His voice is a voice from the streets."

—Richard Falco, author of "To Bear Witness," September 11th and "Medics, A Documentation of Paramedics in the Harlem Community."


"The creative nonfiction style of the book allowed Rella to reveal personal experiences and record candid details of more extreme moments on the job without compromising others in the effort."

Lullaby of Broadway
All is not always fair in either love or war...

Manhattan Medics
"An unforgettable picture of 9/11...with its earnest characters and popular style"
Loading…}